The History of
St. Peter's by the Sea Episcopal Church

The above black and white, old timey image is what St. Peter's looked like in 1950 for the first Easter Service in the newly  consecrated church.  That church and its history is described below.  Sadly, or perhaps fortuitously, the church you see above was
​destroyed by fire in 1961.

The Story of how an Episcopal Church Was Planted by a Seminary Student, how it was destroyed by fire and rose from the ashes.

Forecasting a future of healthy growth for the Morro Bay area, Bishop Karl Block, in 1948, purchased a plot of land at the corner of 2nd and E strees (now Driftwood street and Shasta Avenue).  On the property was an older 3-bedroom home that was destined to serve as a vicarage until 1955.
A seminary student, a veteran of combat in the Phillipines in WWII, Mr. Wilfred Hodgkin, was sent by the Bishop to Morro Bay to survey the town.  Mr. Hodgkin walked all over Morro Bay knocking on doors and gathered a group of Episcopalians.  He also had attracted some other adults and even young people.  Under Mr. Hodgkin's leadership, worship services began in an old school house on Main Street near 8th street (now Beach Street).

The group very soon moved to a quonset hut (belonging to the AmVets) situated behind the Creamery buil​ding (a soda fountain that also sold hand-packed ice cream by the quart) at the south-east corner of 5th street (now Morro Bay Blvd) and C street (now Monterey Ave.).

By 1949 Mr. Hodgkin had been consecrated as a transitional Deacon and then as a Priest and the congregation was meeting upstairs (above the then Post Office and Payne's Variety Store) at the north-east corner of 5th street and C street.

At about that time Bishop Block arranged for the purchase of an army chapel from Camp San Luis Obispo.  The reverend Hodgkin, calling upon the many contacts he had made in his community canvas, arranged for the preparation of a concrete foundation for the chapel and also for the army chapel to be cut in half and the steeple removed in preparation to the professional moving company transporting the sections to its new location.  He also arranged for a Highway Patrol escort to accompany the move and to overlook (ignore) those parishoners who sat atop the sections with sticks to lift power lines as the chapel slowly traveled along the streets.  During those days, Highway 1 went along Quintana road and Morro Bay Blvd, turning right and heading to Cayucos on Main Street.  It was two-lanes all the way from the western border of Camp San Luis Obispo. 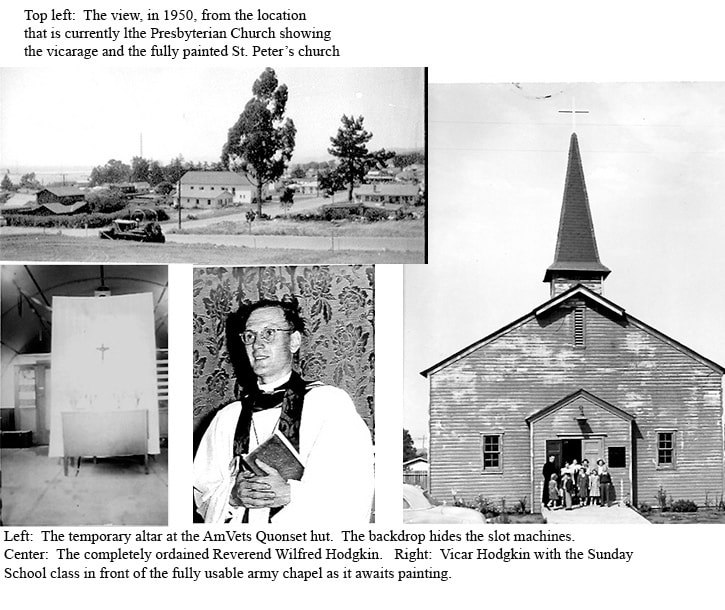 In November, 1951, The Reverend Hodgkin, then about 32 years of age, accepted a call to St. Paul's in Walnut Creek.  From there he was later called to Christ's Church in Alameda where he served the balance of his ministry.

The Reverend Leonard Wood (retired) was put in charge of St. Peter's pending the assignment of a permanent priest from the June graduation class of the seminary.  The Reverend Wood was approximately 75-years-old.

In June, 1952, the Transitional Deacon George Graydon, about 30, was appointed to St. Peter's and soon became ordained as a priest.  He remained until 1955 when he was called to Holy Innocents, San Francisco.

The Reverend John Speers (35) served for a short period from February to August, 1955.  He became a chaplain in the army. 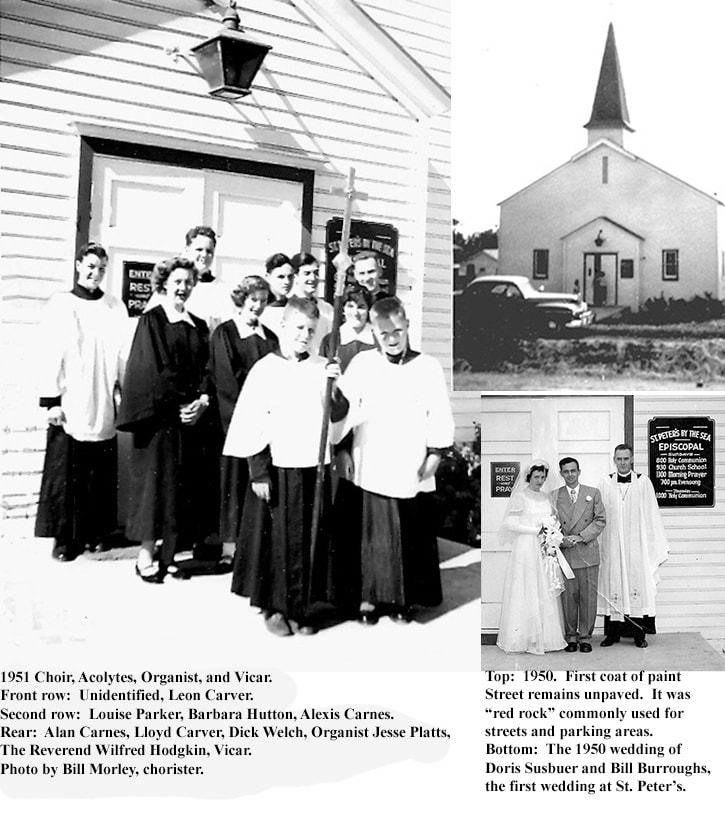 Nearly five months passed without a priest-in-charge.  A not-too-large handful of congregants kept the church going under Warden Ray Owen.

At Christmas, 1955, a retired priest, the Reverend David Robertson, then over eighty-years-old was temporarily assigned to serve St. Peter's and did so until November, 1956.  Also in 1955 a new 3-bedroom house at 474 Bernardo Avenue was purchased and the old vicarage was converted to use for Sunday School classes.

In November, 1956, Transitional Deacon Richard Engeseth (about 29 years of age) came to the church.  He was soon ordained to the priesthood and served until January, 1960, when he went to the Cathedral in Reno, Nevada.

In 1959 the altar area was redesigned by Betty Carlisle Haggberg Pollock.  The new area featured an open altar with a large wooden Celtic cross suspended above it. 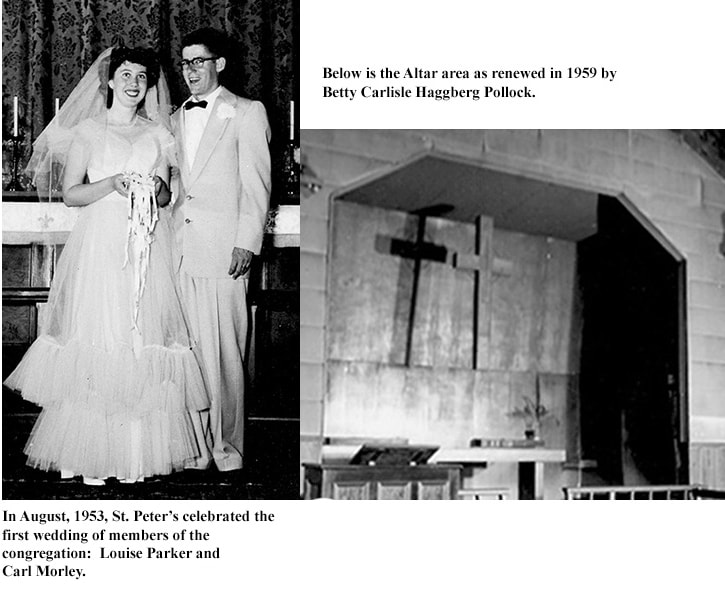 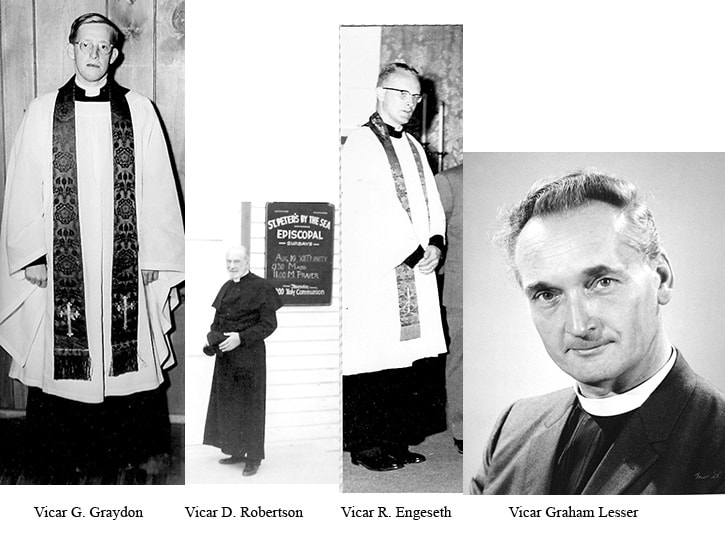 ​In March, 1960, the Reverend Graham Lesser (about 38) became Vicar.  Almost a full year later, on February 9, 1961, the church building was totally destroyed by fire.  Under the leadership of the Reverend Lesser, Dr. Phillip Overmeyer, Warden, and the building committee (William Boelm, Ad Morosin, Eleanor Morley, Gertrude Bertarini, and Mrs. Terry Custer-Gullett) the old vicarage was sold and moved off the property (to 490 Bernardo Avenue), the property was cleared, and a new church and parish hall were built.  The new buildings were dedicated by Bishop James Pike in October, 1962. 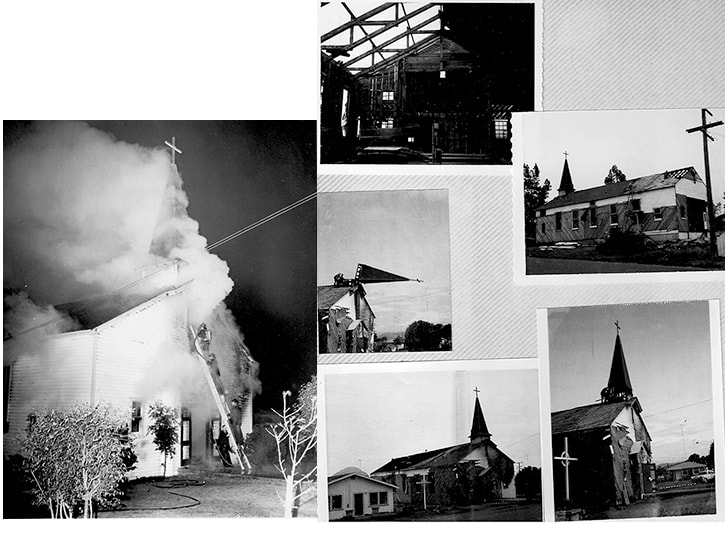 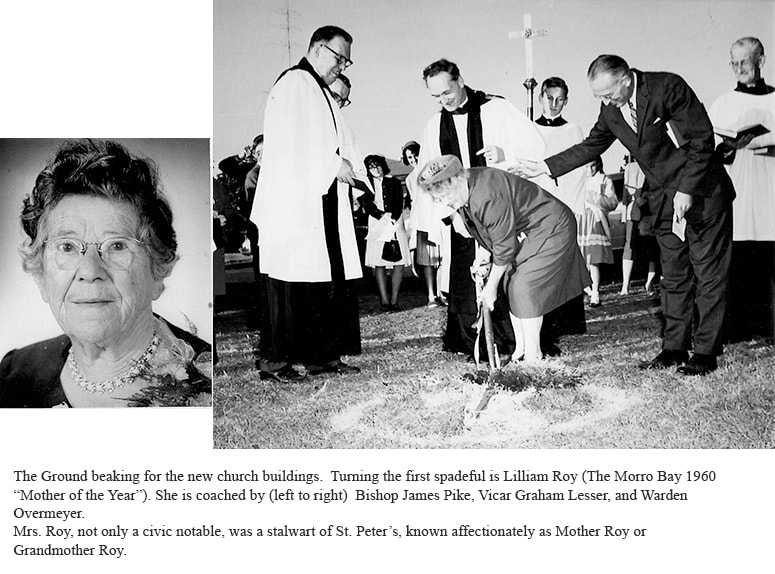 The Rev. Lesser left in November, 1962.  The Rev. Charles Erickson was made vicar then.  He and his wife bought the vicarage in September, 1975 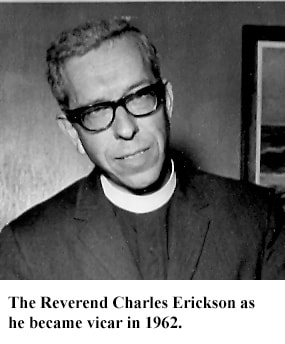 In July, 1977, the final payment was made on the mortgage of the church buildings and on January 15, 1978, The Rev. Erickson and the Right Rev C. Kilmer Myers (then Bishop of California) burned the mortgage.

St. Peter's by-the-Sea became a parish in the Diocese of California.  St. Peter's became responsible for its own financial future.

The contemporary Craftsman's style porch canopy was added, with plans to add stained glass panels at a later time.  An opportunity to purchase a property on Napa Avenue that backed up to the church property arose and the church members subscribed to sufficient loans to purchase the property.  There were two small rental dwellings and a storage building on the acquisition.

In about 1987 the stained glass panels, each commemorating specific former members of the congregation,  were added to the front of the porch 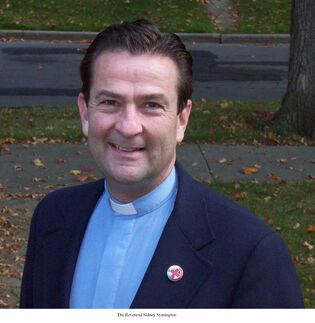 A larger search committee was formed.  The committee members were counseled in the process by the same representative from the diocese.  He attended every meeting of the committee and was skilled in elucidating the necessary steps and gently guiding the committee members to efficiently and imapartially proceed toward the end goal.  The interim rector provided each committe member with the current Microsoft Word program to use on their computers and was generally available to support the counselor.  The committee created a series of steps to take and a temporary calendar for completing each step.

An essential aspect of creating a Parish Profile involved ascertaining as thoroughly as possible, the sentiment of the congregants.  The committee divided into groups and met with small groups of parishioners at private homes, taking notes on the views expressed.  The committee then held an all parish moderated discussion at which members were encouraged to express  individual preferences about a new rector, submit written comments stating their views, and provide information about any aspect of the church and their ideas for improving their experience.  Information gathered in this manner became a part of the Parish Profile.

In the meantime, work toward a Parish Profile had begun.  The committee had decided to include information about the church and its membership, details of the area and the communities from which the parishioners came to St. Peter's.  The profile would also include information gathered in polling the congregation.  The counselor provided links to profiles created by other churches the committee could use to fashion our own effort.  The committee studied the responses and references and telephoned each of the respondents on a open microphone.  Set questions were asked of each candidate and the different committee members rated the responses according to their own understanding.

The responses were discussed and the list was reduced to a smaller number.  It then came the time to divide the committee into subgroups in order to visit each of the clergy on the smaller list.    When the visitations were complete the results were discussed and no additional candidates were eliminated.   So then each of the three candidates was invited to come, one at a time, to St. Peter's.  They were housed in the homes of committee members.  They met with the committee and the vestry and were quizzed by the vestry members and shown around the local area.
In the end, the vestry called the Reverend Sidney Symington.  He began service on March 10, 2013.